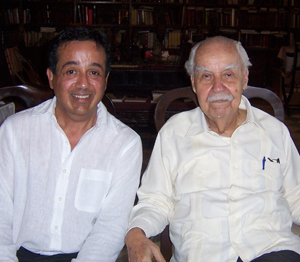 When Richard moved to San Juan in 1999, he saw the collection as a joint project of Dr. José Torres Melendez, MD. and was fascinated by the origins of the tradition. Caribbean Consulting was a leader in cultural tourism marketing and Richard was surprised that the rich patrimony was not made available to tourists and that most santos were held in private collections.

Attending the annual Encuentro de Santeros (Meeting of the Carvers) in Orocovis, PR - he learned how the art almost disappeared by the 1980's when this event was created to resurrect the tradition and appreciated its evolution from a religious representation to a symbol of Cultural Nationalism and pride.

During Richard's first visit to the Puerto Rico Museum of Art (MAPR) - he only noticed three santos on display and again was told that most santos were held in private collections which were not open to the public. This was the inspiration to create an online 'virtual museum' where tourists could learn about the traditional 'household saints' at www.museodelossantos.com.

The story of the these household saints - inspired by. faith, almost forgotten and eventually rediscovered was fascinating - but difficult to find information which would be available to tourists so he created www.museodelossantos.com in 2005 as a 'virtual museum'.

With the success of the website, the collection was displayed at Caribbean Consulting and available by appointment only using Santos borrowed from the collection of José Torres Meléndez. Surprisingly, the website was equally appreciated by tourists, local residents and members of the diaspora who found the website as one of the only online resources for this important tradition.

Over the next decade, the collection grew to more than 400 santos and thousands of people visited individually or participated in events such as the opening ceremonies for FERINART biennial artisans festival, conferences, seminars, receptions and even weddings.  José became a recognized expert on santos and discussed the possibility of a permanent museum with cultural icons such as Don Ricardo Alegría and Teodoro Vidal. He also initiated an oral history project recording personal histories of elderly santeros (carvers) and people inspired by their work.

In 2017, José earned a Ph.D. degree from the Centro de Estudios Avanzados de Puerto Rico y el Caribe in Old San Juan completing his thesis on Celestino Aviles and his importance in reviving interest in santos as a symbol of cultural nationalism.  At this time, he was invited to contribute histories of the the santos for the website and we started discussing the possibility of a permanent museum dedicated to santos.

In 2019 we initiated an AirBnb Experience - Monday Night Only: Museum + Bomba Tour to encourage tourists to visit the museum and then visit nearby La Terraza de Bonanza for their weekly Bomba y Plena night.

We have now outgrown our current space and its time to establish a permanent Museo de los Santos.

A building has been acquired in the Santurce Arts District of San Juan for a permanent museum at 1673 Ave. Ponce de Leon with the help of a private 'bridge loan' which must be repaid by 2024.

To broaden the appeal of the new museum, it was rebranded as MUSAN: Museo de los Santos y Arte Nacional and combined with the Ellie Pruess Collection of mid-century modern paintings and Dr. Torres Meléndez's Oral History Research.

MUSAN's Vision: The new building will provide 3,100 square feet in a multi-level space:

Our vision is to establish an independent, self-sustaining museum, research institute, exhibition space & community center that welcomes government assistance but is self-sustaining over time.

Other Museums Dedicated to Santos

Although I did not realize it when I created my original website - there have been several efforts to establish museums dedicated to Santos before I registered www.museodelossantos.com to create our 'virtual museum' in 2005.

There was a museum in Old San Juan which was called 'Museo de los Santos' in the 1970's.  If I had known this, I probably would not have used the same name for our museum. It is difficult to find information regarding this museum, so if anyone has information, please contact us and we'll include it in our site.

Teodoro Vidal lead an effort to obtain the building which currently houses the Puerto Rico Conservatory of Music for a museum dedicated to Santos.  When this was unsuccessful, he donated a large part of his collection to the Smithsonian Institution in 1997.  A few santos are on permanent display in Washington, DC - but the majority of the collection is kept in storage.

Another large group of Teodoro Vidal's collection can be found at the Fundación Luis Muñoz Marín in Trujillo Alto, just outside of San Juan, PR.

In the southern city of Juana Diaz, PR you'll find the Casa Museo de los Santos Reyes which has more emphasis on the tradition of the Three Kings and Three Kings Day plus contemporary carvings.

Private & Group Tours are available any day by appointment!
Call Richard at 787-455-4216 or info@musan.org to schedule visits!

Click here to join MUSAN (memberships of $100/year or more include NARM membership for two).